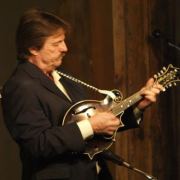 Ron Spears is a familiar name in theBluegrassworld. He has been on theBluegrasstrail for 40 years. He is known for his soaring tenor voice and great original songs. He has been a member of such noted bands as Rhonda Vincent and The Rage, The Special Consensus, Doyle Lawson and Quicksilver, David Parmley and Continental Divide and his own band Within Tradition.

Performing with Ron will be three great musicians from the Intermountain West. Jake Workman has placed in the top three at Winfield on guitar and banjo over the last few years. He is a great multi-instrumentalist. His wife Rebekah will be joining in on Fiddle and harmony vocals. Tim Morrison will be playing bass and helping out on the vocals also.

Early bluegrass musicians had diverse skills, most had solo specialties- comedy, instrumental skills or songs with-in the band.  Ron is an incredible musician, accomplished songwriter and ventriloquist; so in keeping with tradition, Ron’s comedy skills will have you laughing your head off as he introduces the audience to his special guest Delroid.